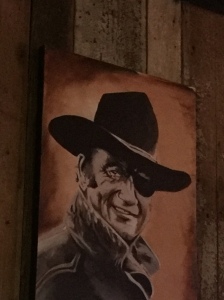 Dedicated to my mother, Gracie, on this Mother’s Day … she loved her westerns and cowboys, too!

“…If you want any one thing too badly, it’s likely to turn out to be a disappointment. The only healthy way to live life is to learn to like all the little everyday things, like a sip of good whiskey in the evening, a soft bed, a glass of buttermilk…” Augustus McCrae, Lonesome Dove

So exactly how did my connection with and passion for the West begin? My once upon a time goes like this…

The drive-in movie was playing a double feature that night in the summer of 1969. The kids, my brothers and I, were in our pajamas in the back of the station wagon- our little movie theatre. The summer air – humid, salty thick from the beach across the street. A clunky, metal speaker hung on the car window producing the voices and sounds for the first feature on the screen: Swiss Family Robinson. I remember, most of all and maybe only, the sprawling tree house the Robinson family lived in. The end. Movie over in my memory.

But it was that second feature movie, the one my parents looked back over their seats for and said “okay kids now you all go to sleep … this is our movie next.” Most seven-year-old girls might have complied and simply fallen asleep thinking of the treehouse adventure prior.

What first caught my eye and grabbed my attention? A landscape I’d never seen. Horses. Cowboys. Bad guys. Rustic towns. Adventure. Rattlesnakes. Whiskey. And the young girl. How’d she get there? Why is she there? Where’d she come from? I was a little W girl going way, way back. Who? What? When? Why? Where? and of course, How? Questions … lots of them, always!

As John Wayne, Glen Campbell and Kim Darby’s characters came to life on the gigantic screen, I could never guess that True Grit would be my first initiation to anything of the West. From that opening scene to the closing credits – I watched every second of it!

And maybe the most vivid scene in my memory from nearly 50 years ago – John Wayne’s Rooster Cogburn riding his horse across that meadow with a rifle in one hand and a pistol in the other – reins in his clenched teeth provoking Ned Pepper (a young Robert Duvall) — “Fill your hand you SOB…” as he comes stampeding forward guns blazing!

Such rawness and vigor…And all viewed through my little 7-year-old eyes. And somehow from there, as if that movie awakened a place and time I’ve lived/ known before — my undeniable draw to Western books, movies, tv shows, music, styles. My connectivity to the West.

Little House on the Prairie. Dr. Quinn, Medicine Woman. Deadwood. Open Range. Broken Trail. Hell on Wheels. 3:10 to Yuma. Godless. Yet it was the Pulitzer Prize winning novel Lonesome Dove, and then its television mini series in 1989, that was my biggest draw of all to the West…and to Montana. A story of hope and loss. Of perseverance and true grit.

Augustus McCrae, my favorite character of all time, was played by my favorite actor of all time — Robert Duvall. His simple cowboy wisdom quoted above captures a life plan that we all may benefit from practicing.

I’d always known I’d someday visit Montana. And the visits in ‘06 and ‘17 were journeys I still can’t fully describe – such a deep connection to the land, the energy, the history and the Native American people. Both journeys to Montana brought clarity and peace – that have sustained in all the days to follow.

Is there a piece of another place and time in each of us? Can that feeling explain the draw we feel back to that place? So there it is…a little bit of how my West was first won.

Every journey matters … and we are most fulfilled living in gratitude and appreciating as Gus said— “to learn to like all the little everyday things.”

Note: John Wayne’s Rooster Cogburn — Photo taken at the Whiskey Bent Saloon, Nashville 5.12.18. And the inspiration for the timing of this piece …

One thought on “True Grit”